Continuing on from my full-day test of the Dodotronic Hi-Sound Stereo, in the steppes, on the Friday of the long weekend here, on the Sunday, I decided to head north to the Pyrenees for a different suite of species. The weather was perfect. It was totally calm, not too cold and there weren't too many people around, when I arrived at Coll de Pal. I had a little unfinished business here, having dipped  Snowfinch on the previous two visits, so it was a good excuse to return. Little did I know I would dip yet again.

I decided to stop near some pine trees first, to see if I could record Coal and Crested Tits, and I wasn't disappointed. It wasn't a big ask though, to be fair. Upon stepping out of the car I could immediately hear both species. The stage was set - the purity of the silence, only interrupted by bird song was amazing. This first audio sets the scene pretty well - no noise; just me, my machine and the birds. It starts off with a Coal Tit, which eventually tapers into a Chaffinch in flight which lands and begins to call. In the background are several other Pyrenean winter species including Fieldfare and Crossbill.

As I was surrounded by several target species I spent some time here and one by one I recorded each species until my arm grew tired or I was satisfied with what I had obtained. Next are the stationary "pink-pink" calls of a perched Chaffinch, a very familiar call from back home.

Before long, I had a very close Crested Tit in front of me. A typical species in pinewoods in these parts with a very distinctive call, consisting of several "see - see - see" notes, followed by a rapid thrill. This, for me is an evocative species and  I really like the call. As a result I've wanted a nice recording of it for a while. With my old setup I never got anything worth keeping so I was very happy with the following - recorded from a bird just a few feet away from me!


As I was watching and recording birds in the pines trees, there were also lots of birds passing overhead, making small internal movements within the area. These included both Goldfinches, Mistle Thrush and lots of Crossbills. Mistle Thrush is a scarce bird in the delta so this proved to be a good opportunity to get a recording of the raucous, almost offensive rattle of a bird which flew over my head.

Goldfinch is a common bird here but I didn't have a nice recording of its melodic song or call so I took advantage of the silence there obtaining the following as a bird obligingly flew right overhead: 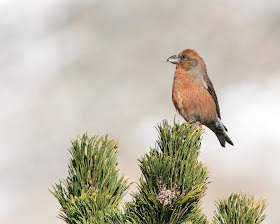 Next I focused on Crossbills. They are quite common at altitude in the Pyrenees and I was bumping into feeding groups and hearing flyovers regularly. I've always found subspecies and cryptic birds rather appealing. Crossbills are an interesting species in that regard because of the fact that there are multiple call types, depending on the region. Some say they are separate species but I find it hard to believe and think that these call types are just regional dialects. Then again, I haven't poured over any literature nor do I have experience with these different call types.


Perhaps, in some time I will be in a better position to form a more objectified opinion for myself. For now though, I thought it was interesting, on a personal level to start becoming better acquainted with excitement calls, flight calls, chitter calls etc., and so I spent nearly 30 minutes listening and recording some really obliging birds. Comparing and contrasting the calls, all birds I encountered seem to fall into the N12 call-type bracket which is the expected call-type for the region.


The following clip depicts two males giving excitement calls from the top of a conifer, before alighting and fighting in mid-air at 26s, giving threat calls.

Here are some flight calls given by some birds in the same area:

After some time I decided to go a little further up, above the treeline, to search for the 170 Snowfinch that were reported an hour earlier. Despite hours of searching, of course, I didn't see them, because the species doesn't actually exist!!


What I did have up there though were some really nice views and listens to both Raven and Alpine Chough and I got some really nice recordings of both. Raven is a bird with a surprisingly diverse vocal range and they can make some really interesting sounds and so I plan to spend some time recording this species when possible. The first recording I took of the species happened here when two birds flew over my head. The following recording features one of these birds wing-beats as it passed directly over, occasionally giving a single, short, disyllabic, metallic-sounding call


A little bit later, I heard one of these birds give a very different sounding "toc-toc-toc-toc" call. I assume it must be a social call of some sort but I've never knowingly heard it before.

Of course the Alpine Choughs were one of the big stars of the day. They appeared over the peak at one point in an impressive flock wheeling down out of the sky making a hell of a racket. Their vocalisations are unlike any other corvid, being much higher pitched, and beautifully melodic.


Again I was left highly impressed with the performance of the Dodotronic. I was in the field for 7 hours with it in my hand and I never once felt it weighing me down. The acoustics of the site on the day were amazing and it allowed me to see the setup perform in optimum conditions. I think the last audio above reflects the recording quality of this setup as well as the amazing acoustics of the site on the day. So if anyone out there is thinking of taking up sound recording and would like the best quality possible, without spending a fortune then go ahead and buy yourself a Dodtronic parabolic setup. You will absolutely not regret it!